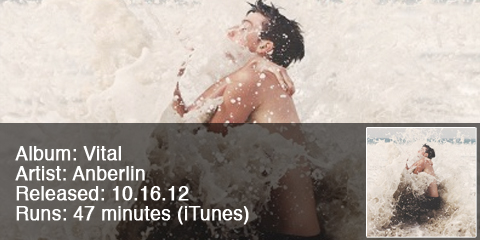 In many ways, Anberlin’s latest album is perfectly represented by its cover: ambiguous, thrilling, the familiar tinged with the curious; whereas the band’s first trilogy covered the man vs. world, vs. man, vs. self conflict spectrum, Vital is a synthesis of all three, as the boy hugs the ocean, a lover, and himself. Over its 11-track course frontman Stephen Christian wrestles against loving and being loved, losing and being lost, all against a cascade of thundering guitar more reminiscent of the band’s Blueprints era than more recent entries.

Anberlin loves huge, in-your-face openers, and “Self-Starter” continues the trend, speaking strongly of being lost and conflicted. An indictment of hedonistic living, Christian laments how we “long for love, but then undress. Our hands: no bounds; our hearts: detached. We grasp for all that will not last.” These words pour themselves into a pre-chorus in which an inability to feel or find one’s way resound with hope for resolution.

Pleading for someone to “tell me again what’s real” carries over into a strong second track, “Little Tyrants,” wherein Christian asks “can you even tell me what’s for real?” and asks “Am I alive? Someone tell me / Am I alive?” Intriguingly, the duplicity suggested by the aforementioned cover image manifests itself here, as the second person is muddled with the first and the “king of an island of one” that Christian appeals to conflates with Christian himself, who changes his inquiry: “Are you alive? Someone help me! / Are you alive?”

I love this album primarily because it does something the past two albums have failed to do: speak directly to where I am, putting into music and lyrics the inchoate emotions and thoughts I’ve battled with for the past few weeks. The bondage of selfishness and self-obsession is addressed boldly in this album, the consequences thereof encapsulated neatly in the phrase “dead inside; what’s yours is mine…all hail the king.”

Such somber thinking leads to a moment of appeal to something greater than ourselves, as “Other Side” slows things down a little (slows, not quiets). Dwelling on death and what comes after, and a little desperate, Christian cries out for trust, comfort, and love. It’s painful to see a professing Christian so seemingly without consolation — worse, still, to see the desire to be known superseding the desire to know. As an interlude between heavier songs, it’s rather unsettling.

If any song on the album were a contender for better opener than “Self-Starter,” it’d be “Someone Anyone,” an acerbic cry for help against life-manipulating forces seemingly beyond control. Anyone who has ever been caught in the throes of addiction will appreciate the honesty of questions like “Do we not learn from mistakes? / Do we not have what it takes?” and the destructive power of any relationship (not just with people) that takes a hold of us against our will.

Musically, there’s a (not-so) subtle 1980s influence throughout the album, with electronic and synthesized sounds clearly infringing on Anberlin’s trademark heavy guitar riffs. Vocal manipulations reminiscent of acts like Def Leppard worm their way in as well (“Intentions” and “Innocent,” in particular, seem stolen from the era, albeit with giveaway distorted bass signaling more modern origins).

Speaking of “Innocent,” while vague as ever, the song does have some interesting (and worrying) theological implications. Taken with enough salt, though, it’s true that humanity was created with an innocence and liberty since lost (“We are all born the innocent / We were born to run carefree”); it’s also true that eternal life precludes an end (“I will hold on until the end / There will never be an end”).

“Innocent” serves as as a meditative midpoint for Vital, after which we are hurled back into the churning rage of “Desires,” where we find Christian once more attacking selfishness and building towards one of the most memorable choruses in the band’s canon, wherein the faux royal motif of “Little Tyrants” is brought back. Kingship has its cost, and “heavy lies the crown.” This song works very well as a tirade against both self and other, as we stab ourselves in the back as often as we receive knives from those we love.

“Type Three” is perhaps the most opaque track on the album, beginning with a seeming justification of sin but later defending faith as, at the very least, a way out of a life plagued with hopelessness and despair: “I look to heaven to save me / and you call me naive. / Rather be a hopeless lover / than cursed with disbelief.”

Similarly obscure is “Orpheum,” which (after a mournful piano introduction) sounds like the downward spiral it describes, repetitively asking “am I losing control?” as its sonic spin answers the question wordlessly.

“Modern Age” has a very Cities feel to it, with its tribal drums, driving guitar, and the question “are we all lost” echoing through the beginning of the verse (though again the vocal mutations crop up to remind us we’re somewhere new). Lyrically, it is a paean to taking chances and truly living, with a dash of universality on the side, asking “Don’t we all want to belong? / Don’t we all write our own song? / Let our silence break tonight” and then, finally, “Sing it!”

With a sound as grungy as its subject matter, Anberlin finalizes the last album’s break with traditionally long and beautiful album enders with a fairly dark and standard-length tune that speaks of hollow estrangement, of leaving a lover for whom “God, Drugs, and Sex” — ostensibly three powerful motivators — are impotent. The final words are a repeated, chanted  “Let go, let go of me now: I’m not here…I’m already gone.” It’s an unsettling song, perhaps moreso because it is the end of the album, the message and emotion Anberlin has decided to leave its listeners dwelling on as they leave Vital behind them.

Unless, of course, you bought the album on iTunes, in which case you have one more song: “Unstable.” One of the band’s most melodic (perhaps I should say un-doctored) tracks, the stars here are Christian’s soaring voice, a piano, and those old familiar drums. A nice song but seemingly out of place, it works as a bonus track only insomuch as it would not have made sense in any other context; it wants to be longer, but ends almost abruptly, and as a second ending to Vital it is perhaps even less satisfying than the first.

I was quite disappointed with Anberlin’s last two albums. As Vital marks the end of a second LP trilogy, it’s difficult to avoid comparisons to the first one, and particularly to the end of the first one — Cities, unquestionably their best work and unlikely, at least in my opinion, ever to be quite outdone. New Surrender was likable but mostly forgettable, and Light…Dark… was, as I said when it came out, a bit too vitriolic for my tastes. I concluded that review questioning the band’s future direction, wondering if they’d find themselves again.

To be honest, had Vital ended with “Modern Age,” I’d feel a lot better about Anberlin — not necessarily as a musically-enjoyable band, but as an outfit that approaches a difficult world with a positive outlook. Far more than Dark…Light…, Vital suggests the glimmer of a silver lining, but the band’s decision to go one track further leaves lingering, troubling doubts.

That said, they’re certainly on the right track, and for that I’m quite grateful.